This week was Valentine’s Day, and I couldn’t have been more thrilled about it! Aside from Christmas it’s my favorite holiday of the year, and since romantic movies are my most beloved genre as well, I thought that this would be the perfect opportunity to combine my love for the day with my love for classic film. Today I’ll be focusing on some of the best unsung onscreen couples of Hollywood’s golden age, putting an emphasis on actors and actresses who weren’t romantically involved offscreen (with a couple of exceptions), but who were able to make sparks fly while the cameras were rolling.

When one thinks of Power and his best costars, Loretta Young probably sits near the top of the list no matter who you ask, but as a whole I feel that their films as well as their onscreen chemistry are overlooked compared to that of a duo like Bogie and Bacall. Katharine Hepburn actually said of that pair, “When they fought it was with the utter confidence of two cats locked deliciously in the same cage”. I think this quote also applies to Power and Young’s characters in their films, as they’re often seen trying to outsmart or bicker with one another more than they’re seen professing their love. In fact that part usually only comes at the end, and the viewer spends most of their time during each of their movies wondering whether they’re going to kiss or tear each other’s heads off. Love is News (1937) is the best example of this as well as their unique cleverness that they use both on their own and as a couple that always makes their pictures interesting to watch.

Rita Hayworth is the type of actress who pairs so well with whomever she shares the screen with that I have to admit that both her pairings with Gene Kelly and Fred Astaire were serious contenders for this list, but I had to go with the former because to this day it makes no sense to me that Cover Girl (1944) marked their only collaboration. In my opinion, Kelly and Hayworth had the potential to mold their partnership into a 1940s version of Astaire and Rogers, making Columbia Pictures into a powerhouse of a studio. Cover Girl (1944) was actually Columbia’s first Technicolor musical, and while Gene was three years into his marriage with actress Betsy Blair and Rita actually married longtime love Orson Welles while filming the movie, you’d never know it when watching the film’s romantic and Oscar-nominated song, “Long Ago (and Far Away)”. Cover Girl (1944) was nominated for five Academy Awards in total, winning one for Best Musical Score, and its monumental success at the box office led to Columbia purchasing the rights to Pal Joey, the hit Broadway musical that originally starred Kelly. The film adaptation was meant to be the second film for Kelly and Hayworth but it never came to pass, and Frank Sinatra ended up stepping into the lead while Rita played the part of Vera more than ten years later. 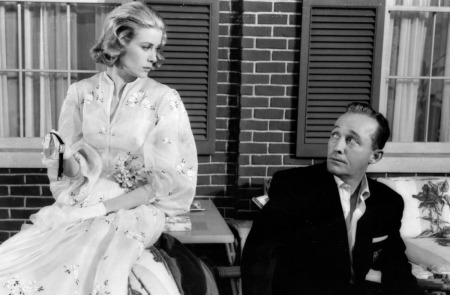 Earlier I mentioned that there would be some exceptions on my list of strictly onscreen couples, and here’s the main one. Rumor has it that Bing Crosby was smitten with future princess Grace Kelly offscreen as well, even proposing to her while filming their first picture together, The Country Girl (1954). She turned him down, not wanting to ruin the relationship that the two had already built, and the two went their separate ways with Kelly marrying Prince Rainier II of Monaco in 1956, and Crosby marrying actress Kathryn Grant in 1957. While they might have denied us any glimpse of a real life relationship, they certainly didn’t deny us any fireworks while making their films. After watching a multitude of Bing Crosby films over the last few years, I’ve found that it was very easy for his leading ladies to get lost in his shadow. In fact, many of his female costars from the 1930s and 1940s didn’t continue to receive the starring roles that they so rightfully deserved, like Mary Carlisle, Frances Farmer, Marjorie Reynolds, and Kitty Carlisle. Grace Kelly is the notable exception, holding her own against Bing in both a dramatic picture like The Country Girl (1954), winning an Academy Award for her performance while Bing was only nominated, as well as a romantic comedy, shining brighter than ever before alongside him in High Society (1956). It’s hard to deny their chemistry when you watch them wrapped up in each other’s arms in the latter film singing the musical’s most popular hit, “True Love”. They might not have shared true love offscreen, but we will always be able to admire their connection by watching their pictures.

This is a couple that’s only recently caught my attention, as just a couple of weeks ago I saw Hudson and Lollobrigida’s second picture together, Strange Bedfellows (1965) for the very first time. I was simply stunned while watching it because I couldn’t recall seeing such an overwhelming amount of sexual chemistry between two actors despite not being attracted to each other in the slightest in real life. Never had I watched a movie and thought to myself within the first fifteen minutes, “Wow, they would have had such beautiful babies”, but the thought certainly crossed my mind as I saw Rock gaze into Gina’s eyes in the back of a taxi. Of course everyone, myself included, adores Rock Hudson paired with his better-known costar Doris Day, but Rock and Gina is certainly not a duo to be overlooked. In fact I believe that they have a certain passion that Hudson lacks with Day. This is another pairing, like Power and Young, that I love to watch fight to the death, with Gina breaking plates and yelling in Italian, but I love to watch them make up even more. Strange Bedfellows (1965) embodies all of the characteristics of the sex comedies of the sixties, as it was not only laugh out loud funny (I woke up my roommate by laughing so hard at the British cabbie’s conversation with his telephone operator, as well as Terry-Thomas’ delightful cameo as a funeral director), but the dialogue was so scandalous in parts that I wondered how the film could have possibly been made at the time. Either way, just from one viewing Strange Bedfellows (1965) has become a favorite of the genre in my opinion, and their other picture, Come September (1961), has soared straight to the top of my watchlist as a result.

I could discuss the pairing of James Stewart and Hedy Lamarr all day if given the chance. They only made one film together, and they don’t quite count as a strictly onscreen couple because they supposedly dated during filming, but still they top this list for a reason. Come Live With Me (1941) was practically written for Stewart and Lamarr, with Stewart playing a pessimistic and sarcastic writer who makes an arrangement with wealthy Viennese beauty Lamarr in which he marries her in name only so she can stay in America while in return she pays his bills so he can finish his novel. Of course things don’t stay in name only for long, and their interactions in front of the camera generate fireworks every single time they appear. One might think that the two wouldn’t work together because they’re from two totally different worlds, but that’s just what I love about them. Stewart’s iconic All-American everyman type is the perfect yin to Hedy’s sultry, exotic and mysterious yang, and when you put them together it’s a match made in heaven. As a result, I will always place Come Live With Me (1941) near the top of my list of beloved romantic comedies. No, really it belongs on my list of favorite films, period. It’s that incredible, and so are they.

I’m Samantha Ellis, I’m twenty-two years old, and I’m the classic film addict here at Musings of a Classic Film Addict. I try to make just about every aspect of my life involve old movies in some fashion, from dressing in vintage clothing to cooking the personal recipes of the stars of yesteryear. I currently reside in West Chester, Pennsylvania and I take film classes often. My goal is to one day complete a degree in Film Studies and work as a film historian and an author for classic film-related organizations that I care about like Turner Classic Movies and the Film Noir Foundation, among others. View all posts by Samantha Ellis

2 thoughts on “My Top Five Most Underrated Onscreen Couples”

THE ROSE OF MGM: THE GREER GARSON BLOGATHON