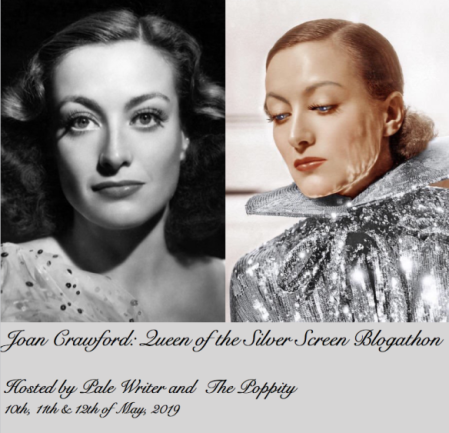 I feel like it’s been forever and a day since I’ve written an article for a blogathon! In reality it’s only been just over a month, but I’m still so glad that I’m able to participate in The Joan Crawford: Queen of the Silver Screen Blogathon hosted by two of my favorite bloggers, Gabriela of Pale Writer and Erica of Poppity Talks Classic Film! Joan Crawford has been an actress that’s remained in my peripheral vision until recently. I knew about her, appreciated a few of her films, and I took her side in her infamous feud with Bette Davis due to my distaste for Bette, but I never truly appreciated Joan’s significance as a feminist icon and a legendary acting talent until I watched Possessed (1947) for the first time last year. My adoration for Joan and her work has only grown as I’ve discovered more and more of her classics like The Damned Don’t Cry (1950), The Women (1939), and Montana Moon (1930). I knew that this blogathon, which is paying tribute to this beloved actress on the forty-second anniversary of her passing, would be the perfect opportunity to discover another one of her films, and it didn’t take me long to figure out which picture would be the subject of my attention: none other than Johnny Guitar (1954), one of Joan’s most successful forays into the Western genre.

I’ve become deeply interested in westerns after watching my first-ever Gene Autry film last year and my first Roy Rogers picture last month. I also had the privilege of being first in line for the world premiere restoration of Anthony Mann’s Winchester ’73 (1950) at the TCM Film Festival this year, and I’ve been hungry for more features from the genre ever since. I’ve also heard tell of Joan Crawford’s groundbreaking feminist dialogue in Johnny Guitar (1954), and I’m a gigantic fan of Peggy Lee’s ballad of the same name which I hoped would appear in this film. After wondering what the plot of this movie was for so long, I found out that Johnny Guitar (1954) isn’t actually about Sterling Hayden’s title character at all. Most of the picture follows Vienna (Joan Crawford), a tough-as-nails woman who started from nothing and worked her way up to finally owning her own saloon and gambling joint. Vienna’s place is frequented by The Dancin’ Kid (Scott Brady) and his gang: Turkey (Ben Cooper), Bart (Ernest Borgnine), and Corey (Royal Dano). Vienna and The Dancin’ Kid had a relationship that’s ancient history, but that’s not what the wealthy and vindictive Emma Small (Mercedes McCambridge), who is secretly in love with the outlaw, believes. She would rather see him dead than with anyone else, so when his gang is accused of robbing a stagecoach and murdering her brother, Emma pins the crime on The Dancin’ Kid and Vienna. What begins as a simple misunderstanding soon turns deadly when Emma convinces the whole town, including the law, to side with her and condemn the entire gang to the gallows despite knowing they’re innocent.

This was the second of only two western films that Joan Crawford would ever appear in, following Montana Moon (1930) twenty-four years earlier. Joan had a variety of actresses in mind to portray on-screen rival Emma Small, including real-life rival Bette Davis and Barbara Stanwyck, who both proved too expensive, and Claire Trevor, who was tied up with another film commitment. Director Nicholas Ray eventually brought in Mercedes McCambridge, which began an on and off-screen rivalry that would last through the entire production. It’s unclear exactly how their animosity began; some say that McCambridge teased Crawford about formerly dating her husband, others say that the two actress’ alcohol issues attributed to the feud. Both stars were supposedly upset about the other receiving preferential treatment from Nicholas Ray, who was in the midst of an affair with Joan. No matter how their bickering began, the entire production of Johnny Guitar (1954) suffered as a result. While Ray was delighted at first that the two were enemies, as he hoped that their feelings toward each other would rub off on-screen, it reached the point where the crew had to secretly film McCambridge’s scenes opposite Crawford’s. When Crawford found out about the subterfuge, she scattered McCambridge’s costumes and clothes along the highway. According to McCambridge herself, her career came to a halt for a two-year period after Johnny Guitar (1954) due to Crawford’s attempts to blacklist her. As for Joan, she said of McCambridge, “I have four children — I do not need a fifth.”

I acknowledge the fact that Mercedes McCambridge is a talented actress, especially in Johnny Guitar (1954), but as a whole I’ve never been a fan of her on-screen persona. My eyes were instead glued to Joan Crawford during the vast majority of this film, due in part to the brilliant color cinematography of Harry Stradling Sr., famous for dozens of films like My Fair Lady (1964), A Streetcar Named Desire (1951), and The Pirate (1948). I eagerly anticipated Joan’s witty and strong-minded lines that I had previously heard so much about, and boy, did she deliver! She was unforgettable while sporting a pixie cut and trousers and delivering iconic quotes like, “A man can lie, steal, and even kill, but as long as he hangs on to his pride, he’s still a man. All a woman has to do is slip once and she’s a tramp.” In addition to the dialogue, the action sequences in Johnny Guitar are absolutely riveting. Fake blood in cinema still had a long way to go at this point, but this feature still displayed a lot more graphic violence than other westerns of the time, which I found both welcome and refreshing. According to Martin Scorsese, contemporary American audiences didn’t know what to make of Johnny Guitar (1954) upon its initial release, so “they either ignored it or laughed at it”. European audiences were more liberal and forgiving, seeing the picture for what it truly was: “an intense, unconventional, stylized picture, full of ambiguities and subtexts that rendered it extremely modern”. Based on the groundbreaking achievements I witnessed, I couldn’t agree more with Scorsese’s take. Johnny Guitar (1954) is an excellent picture that was far ahead of its time, and I highly urge modern audiences to see it on this anniversary of Joan’s passing, or any other day that you might feel like saluting such an exceptional actress.

7 thoughts on “The Joan Crawford: Queen of the Silver Screen Blogathon — Johnny Guitar (1954)”