As some of you may know, I’ve had to spend some time away from my blog and the internet over the last couple of weeks due to health concerns. It’s been so hard to have the desire to cook, write, and discuss classic movies while not being able to do anything about it. I wasn’t sure when I would feel ready to jump back into the saddle again, but I soon realized that there would be no better opportunity to continue doing what I love than The Murder, She Wrote Cookalong hosted by one of my favorite bloggers, Jenny of Silver Screen Suppers! This cookalong serves multiple purposes: not only is it the perfect tribute to the classic mystery television series and its stars, but the cookalong’s participants are also testing out a variety of recipes for Jenny’s newest cookbook, all about the favorite dishes of Murder, She Wrote‘s most famous stars! I previously had the pleasure of testing out recipes from Old Hollywood stars Jackie Cooper and Vera Miles for Jenny’s last Columbo-themed cookbook, and I certainly knew that I couldn’t pass up the opportunity to review a recipe from my favorite living actress, Ann Blyth, even if my participation is a little belated! Read on to find out my thoughts on Ann’s Blueberry Muffins and so you can find out how to make them yourself at home! 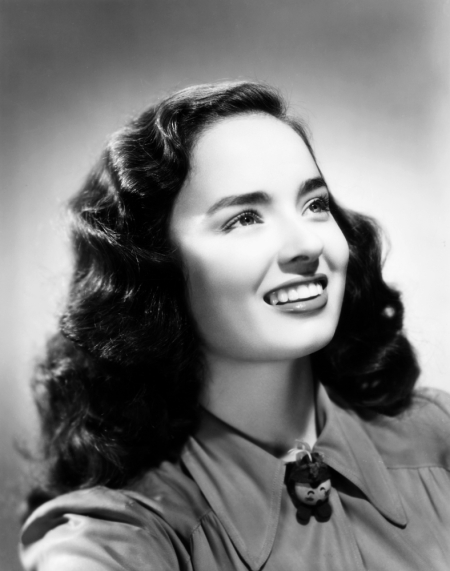 Before I dive into my thoughts on these muffins, I’d like to spell out to you the true extent of my adoration for Ann Blyth. I’ve been a diehard fan of this raven-haired beauty for six years, ever since she was honored with a day of programming in 2013 as part of TCM’s Summer Under the Stars. Over the years, I’ve marveled at Ann’s talent as a singer and an actress in nearly every film that I could get my hands on, from her most popular Academy-Award-nominated work in Mildred Pierce (1946) to her most obscure features like Thunder on the Hill (1951), Mr. Peabody and the Mermaid (1948), my most beloved movie of Ann’s, and the film of hers that I watched as I prepared and ate these muffins, I’ll Never Forget You (1951) opposite my favorite actor of all time, Tyrone Power. When I decided to begin writing letters to my favorite living classic movie stars, Ann Blyth was the very first star that I wrote to. I’m so pleased that I was able to get everything off of my chest and tell her all about how much she meant and has continued to mean to me. I thank my lucky stars every single day that she remains on the same planet as me, and the chance to finally make and review one of her recipes means so, so much to me!

As for the muffins themselves, I’m not trying to glorify Ann any more than I already am when I say that they were absolutely delightful! I went into this recipe a bit worried as the dough was tough to handle, quite dry from the lack of moisture and difficult to combine in only fifteen stirs, but I crossed my fingers as they went in the oven and was astonished and over the moon when the muffins turned out better than I ever could have imagined! They were perfectly made from scratch, were so stunning to look at, and yielded many more than the recipe suggested, twelve delicious treats in total! If I had any complaints at all, I would mention that they did lack a bit in sugar compared to today’s standards, but still maintained a subtle sweetness and natural blueberry flavor. Perhaps I would add more sugar if I ever made these muffins again in the future, but I also love the balance of flavors just as it is. If you prefer making desserts that aren’t overly sweet, as well as baking your own pastries yourself, this is absolutely the recipe that you should try next. It’s sure to wow friends, family, and company, and they would make the perfect stylish and homemade Sunday breakfast too! I give Ann Blyth’s Blueberry Muffins full marks, and I can’t wait for their hopeful addition into Jenny’s cookbook!